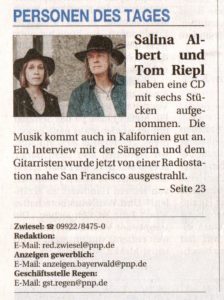 “Persons of the day: Salina Albert and Tom Riepl have recorded a 6-track CD. Now the music also goes down well in California. An interview with the singer and the guitarist was aired by a radio station in the San Francisco area. -page 23…” 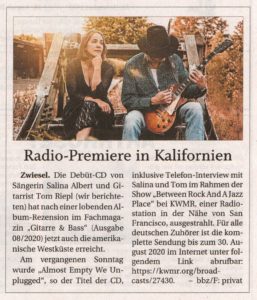 „Radio Premiere in California… After a great album review in the music magazine Gitarre&Bass the debut CD by Salina Albert and Tom Riepl now also made it to the US Westcoast. Last Sunday ‘Almost Empty We Unplugged’ as well as a phone interview with Salina and Tom was featured in ‘Between Rock And A Jazz Place’, a show broadcast by KWMR. That’s a radio station located in the San Francisco area. For all German listeners the show will be available online until August 30th 2020.“ https://kwmr.org/broadcasts/27430